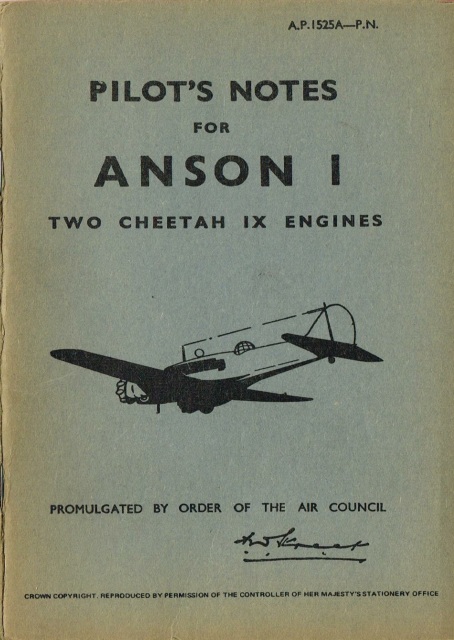 The Avro Anson is a British twin-engined, multi-role aircraft built by the aircraft manufacturer Avro. Large numbers of the type served in a variety of roles for the Royal Air Force (RAF), Fleet Air Arm (FAA), Royal Canadian Air Force (RCAF) and numerous other air forces before, during, and after the Second World War.

Initially known as the Avro 652A, the Anson was developed during the mid-1930s from the earlier Avro 652 airliner in response to a request for tenders issued by the British Air Ministry for a maritime reconnaissance aircraft. Having suitably impressed the Ministry, a single prototype was ordered, which conducted its maiden flight on 24 March 1935. Following an evaluation in which the Type 652A bettered the competing de Havilland DH.89, it was selected as the winner, leading to Air Ministry Specification 18/35 being written around the type and an initial order for 174 aircraft being ordered in July 1935. The Type 652A was promptly named after British Admiral George Anson.

The type was placed into service with the Royal Air Force (RAF) and was initially used in the envisioned maritime reconnaissance operation alongside the larger flying boats. However, by the outbreak of the Second World War, the Anson was soon found to have become obsolete in front line combat roles. However, large numbers of the type were put to use as a multi-engined aircrew trainer, having been found to be suitable for the role, and became the mainstay of the British Commonwealth Air Training Plan. The type continued to be used in this role throughout and after the conflict, remaining in RAF service as a trainer and communications aircraft until 28 June 1968.

During the post-war climate, the Anson was increasingly produced for the civil market, being used as a light transport and executive aircraft. By the end of production in 1952, a total of 8,138 Ansons had been constructed by Avro in nine variants; in addition, a further 2,882 aircraft were manufactured by Federal Aircraft Ltd in Canada from 1941. By the 21st century, the vast majority of Ansons had been retired from flying. However, a single Anson Mk.I, which had been originally manufactured during 1943, had been restored to airworthiness, having been refitted with later metal wings. On 18 July 2012, this restored aircraft performed its first flight.