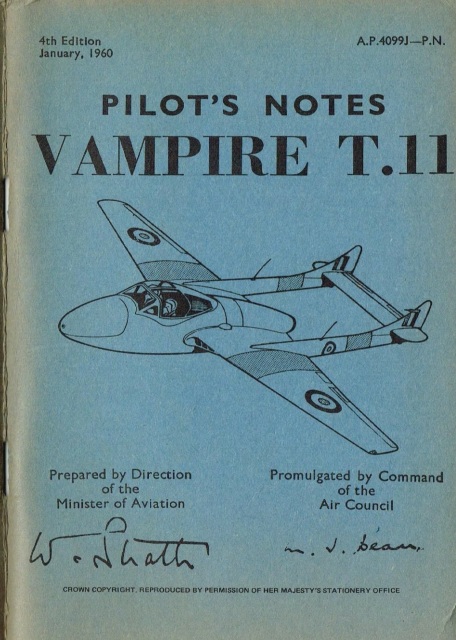 The de Havilland Vampire was a jet-powered twin-boom aircraft, typically employed in the fighter and fighter bomber roles.[9] Aviation author Francis K Mason referred to it as being "the last unsophisticated single-engine front line aircraft to serve with Britain's Fighter Command"; the Vampire was a relatively straightforward aircraft, employing only manually operated flight controls, no radar, a simple airframe, and, aside from the propulsion system, made use of mostly conventional practices and technologies.[9] The distinctive twin-boom tail configuration of the Vampire was one of the only non-traditional airframe features when compared to its contemporaries.[9]

In comparison to later aircraft, the Vampire had a relatively disorganised cockpit that in some aspects lacked ergonomic measures; such as the fuel gauges being difficult for the pilot to observe without pulling the control column back.[28] A few controls, such as the low-pressure fuel cock, were known for being difficult to move or were otherwise obstructed by other controls. The pilot was provided with a fairly favourable external view, in part aided by the relatively small size of the Vampire

The final variants of the Vampire was the T (trainer) aircraft. Being first flown from the old Airspeed Ltd factory at Christchurch, Hampshire on 15 November 1950, production deliveries of the Vampire trainer began in January 1952. Over 600 examples of the T.11 were produced at Hatfield and Chester and by Fairey Aviation at Manchester Airport. By 1965, the Vampire trainer had been mostly withdrawn, its replacement in the advanced training role being the Folland Gnat; only a small number of Vampire T.11s remained in service, typically for the training of foreign students until these were too were retired in 1967.

Pictures of aircraft in the listing are for illustrative and identification purposes only.