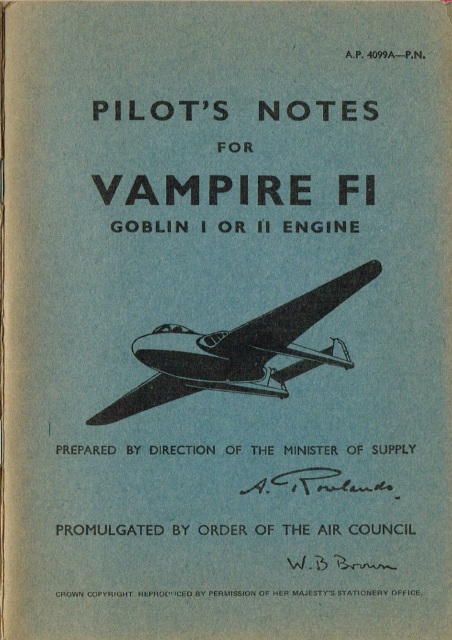 The de Havilland Vampire is a British jet fighter developed and manufactured by the de Havilland Aircraft Company. It had the distinction of being the second jet fighter to be operated by the RAF, after the Gloster Meteor, and the first to be powered by a single jet engine.

Work on the Vampire commenced during 1941 in the midst of the Second World War; it was initially intended as an experimental aircraft, albeit one that was suitable for combat, that harnessed the groundbreaking innovation of jet propulsion. Out of the company's design studies, it was quickly decided to settle on a single-engine, twin-boom aircraft, powered by the Halford H.1 turbojet engine (later produced as the "Goblin"). Aside from its propulsion system and twin-boom configuration, it was a relatively conventional aircraft. Despite being originally ordered as an experimental aircraft only, during May 1944, it was decided to mass-produce the aircraft as an interceptor for the Royal Air Force (RAF). During 1946, the first production Vampire entered operational service with the RAF, only months after the conflict had come to an end.

The Vampire quickly proved to be an effective aircraft and was adopted as a replacement for many wartime piston-engined fighter aircraft. During its early service, it was recognised for accomplishing several aviation firsts and various records, such as being the first jet aircraft to traverse the Atlantic Ocean. The Vampire remained in front-line service with the RAF up until 1953; after this date, it was progressively reassigned to various secondary roles, such as ground attack missions and pilot training operations, for which specialist variants of the type were produced. During 1966, the Vampire was officially retired by the RAF, having been withdrawn from its final role as an advanced trainer after having been replaced by the Folland Gnat. The Royal Navy had also adopted the type as the Sea Vampire, a navalised variant suitable for operations from its aircraft carriers. It was the service's first jet fighter.

The Vampire had been exported to a wide variety of different nations and was operated across a plethora of different theatres and climates across the world. Several different countries deployed the type in combat during several different conflicts, including the Suez Crisis, the Malayan Emergency, and the Rhodesian Bush War. By the end of production, almost 3,300 Vampires had been manufactured, a quarter of these having been manufactured under licence in several other countries. In addition, de Havilland pursued the further development of the type; major derivatives produced include the DH.115, a dedicated dual-seat trainer, and the more advanced DH.112 Venom, a refined variant furnished with a swept wing (instead of the straight wing of the Vampire) and orientated towards conducting ground attack and night fighter operations.