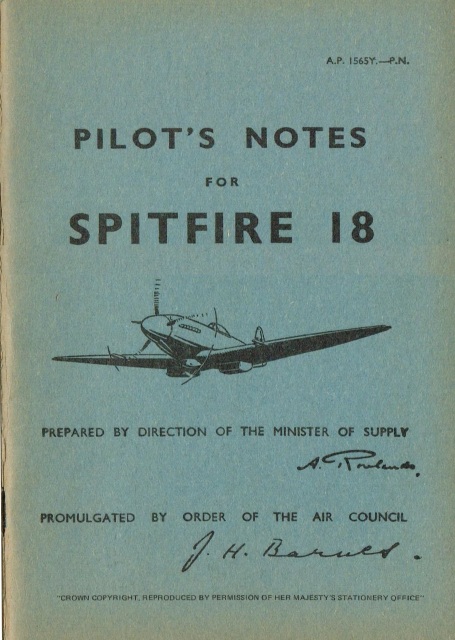 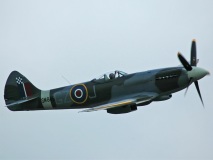 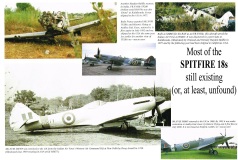 The Rolls-Royce Griffon engine was designed in answer to Royal Naval specifications for an engine capable of generating good power at low altitudes. Concepts for adapting the Spitfire to take the new engine had begun as far back as October 1939; Joseph Smith felt that "The good big 'un will eventually beat the good little 'un." and Ernest Hives of Rolls-Royce thought that the Griffon would be "a second power string for the Spitfire".[1] The first of the Griffon-engined Spitfires flew on 27 November 1941.

Although the Griffon-engined Spitfires were never produced in the large numbers of the Merlin-engined variants they were an important part of the Spitfire family, and in their later versions kept the Spitfire at the forefront of piston-engined fighter development.

The Mk 18 was a refinement of the Mk XIV. It was identical in most respects including engine (the Griffon 65) and cockpit enhancements, but it carried extra fuel and had a revised, stronger wing structure. Its handling was also nearly identical and so it was not put through any performance tests. Like the Mk XIV there were fighter and fighter reconnaissance variants built.

The Mk 18 missed the war. It was built up until early 1946 but it was not until January 1947, that an RAF squadron, 60 Squadron which operated from RAF Seletar, Singapore, was re-equipped with the variant. Later, other squadrons in the Far East and Middle East would receive them. Some 300 F Mk 18s and FR Mk 18s were built, before production ended in early 1946.[38] The Mk 18s saw little action apart from some involvement against guerrillas in the Malayan Emergency. The Royal Indian Air Force purchased 20 ex-RAF Mk 18s in 1947.

SPITFIRE 18 PILOT’S NOTES plus 18 pages of extra information from our archive including a full Spitfire cutaway drawing.