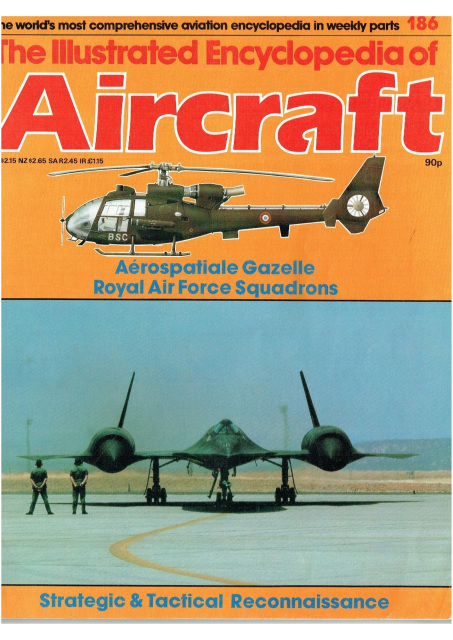 The Illustrated Encyclopedia of Aircraft

The History of Aviation

The World's Greatest Aircraft: generally at least one large cutaway drawing together with interesting text and colour graphics showing various Markings and Camouflage.

Air Forces of the World

The Illustrated Encyclopedia of Aircraft was a weekly magazine by Aerospace Publishing/Orbis Publishing that was published in the UK (and sold in other countries too) in the early 1980s.[1] The magazine was intended to eventually make up a multi-volume encyclopedia dedicated to aviation. Starting in 1982 the magazine lasted for 216 issues, each of 20 pages (plus the cover), making up 18 volumes (4280 pages).[1] The first two issues were sold together for the price of one, subsequent issues were sold on their own.

Empty binders for each volume (set of 12 issues) were also sold. These binders were dark blue in colour and contained the imprint of a Panavia Tornado on the front. They held the issues using a metal strip that was threaded through the staples of each issue to hold them in place. Each issue consisted of four separate sections.