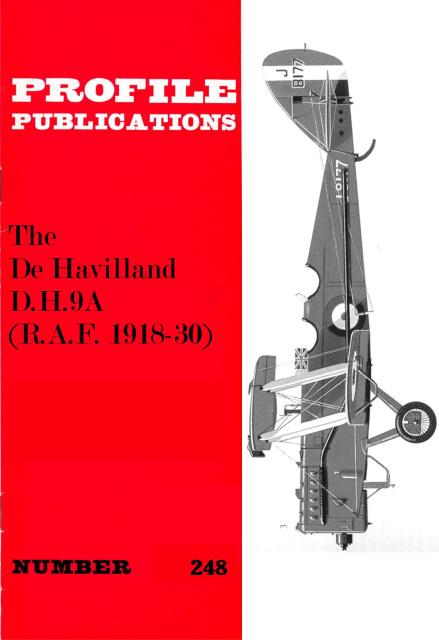 The Airco DH.9 (from de Havilland 9) – also known after 1920 as the de Havilland DH.9 – was a British single-engined biplane bomber developed and deployed during the First World War.

The DH.9 was a development of Airco's earlier successful DH.4, with which it shared many components. These were mated to an all-new fuselage and the BHP/Galloway Adriatic engine, which promised increased performance. Anticipating its usefulness, the type was ordered in very large numbers for Britain's Royal Flying Corps (RFC).

Upon entering service, the DH.9's performance was found to be unsatisfactory. The Adriatic engine was unreliable and failed to provide the expected power, which gave the DH.9 poorer performance than the aircraft it had been meant to replace. The performance deficit was blamed for the heavy losses they suffered over the Western Front. The redesigned DH.9A was fitted with a more powerful and reliable American Liberty L-12 engine which rectified the shortcomings of the original DH.9 model.

During June 1917, partially as a result of attacks by German bombers on London, the War Office issued its recommendation to almost double the size of the Royal Flying Corps (RFC) to a total of 200 squadrons. In early July 1917, the British Cabinet accepted the recommendation, with the intention that the majority of the new squadrons planned to be equipped with bombers.[1][2][2] While an order for 700 DH.4s was placed on 28 June 1917, on 23 July 1917, the Air Board were presented with drawings for a modified DH.4 that delivering greater range under a new type number, DH.9.[2]

The DH.9 was designed by de Havilland for the Aircraft Manufacturing Company in 1916 as a successor to the DH.4. It used the wings and tail unit of the DH.4 but featured a modified fuselage which moved the pilot closer to the gunner/observer and away from the engine and fuel tank, which facilitated communication and was a more optimal fighting configuration.[3] The other major change from the DH.4 was the choice of the promising new BHP/Galloway Adriatic engine, which was predicted to produce 300 hp (224 kW) to provide adequate performance to match enemy fighters.[4]

Based on the performance estimates for the DH.9 (which were initially expected to surpass those of the DH.4), and the similarity to the DH.4, which meant that it would be easy to convert production over to the new aircraft, it was decided to place a massive number of orders (totalling 4,630 aircraft) for the type prior to the aircraft even flying for the first time.[2] Existing contracts originally placed for the DH.4 were also converted to the DH.9. The Air Board had been specifically assured that there would be an initial production delay of no more than a month. According to aviation author J.M Bruce, the selection of the DH.9 "seems to have been taken in a spirit of optimism or blind faith, for its chosen engine was, in July 1917, experiencing serious manufacturing difficulties".

26 PLUS 6 Extra pages from the extensive FlightWay Archives.