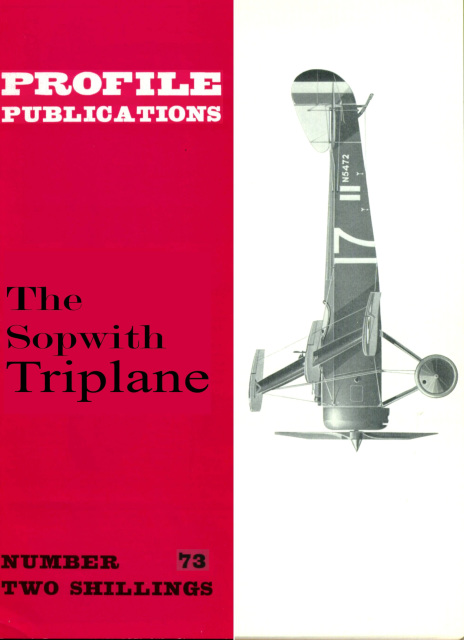 The Sopwith Triplane was a British single seat fighter aircraft designed and manufactured by the Sopwith Aviation Company during the First World War. It was the first military triplane to see operational service. The Triplane joined Royal Naval Air Service squadrons in early 1917 and was immediately successful. It was nevertheless built in comparatively small numbers and was withdrawn from active service as Sopwith Camels arrived in the latter half of 1917. Surviving Triplanes continued to serve as operational trainers until the end of the war.

The Triplane began as a private venture by the Sopwith Aviation Company. The fuselage and empennage closely mirrored those of the earlier Pup, but chief engineer Herbert Smith gave the new aircraft three narrow-chord wings to provide the pilot with an improved field of view. Ailerons were fitted to all three wings. By using the variable incidence tailplane, the aircraft could be trimmed to fly hands-off.[2] The introduction of a smaller 8 ft span tailplane in February 1917 improved elevator response.[3]

The initial "prototype of what was to be referred to simply as the Triplane" first flew on 28 May 1916, with Sopwith test pilot Harry Hawker at the controls.[4] Within three minutes of takeoff, Hawker startled onlookers by looping the aircraft, serial N500, three times in succession.[5] The Triplane was very agile, with effective, well-harmonised controls.[6] When maneuvering, however, the Triplane presented an unusual appearance. One observer noted that the aircraft looked like "a drunken flight of steps" when rolling.[7]

In July 1916, N500 was sent to Dunkirk for evaluation with "A" Naval Squadron, 1 Naval Wing. It proved highly successful. The second prototype, serial N504, was fitted with a 130 hp Clerget 9B. N504 first flew in August 1916 and was eventually sent to France in December.[8] This aircraft served as a conversion trainer for several squadrons.[8]