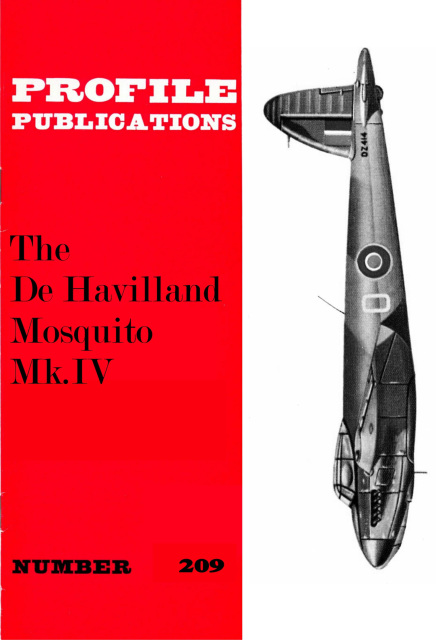 The first order for the production of Mosquito bombers came on 17 July 1941, when the original contract was modified for the second time. Late in 1940 an original order for fifty bomber/ reconnaissance aircraft had been altered to one for twenty one aircraft, mostly photo reconnaissance aircraft or prototypes and a separate order for twenty six fighters. Finally, in July 1941 it was decided to produce nine of the twenty one aircraft remaining in the original order as bombers.

Amongst the other aircraft in that order was the single B Mk V, the original bomber prototype. This aircraft was used as a test bed, but the B Mk V series never entered full production. Instead the interim B Mk IV series remained the only unarmed Mosquito bomber variant until the appearance of the Mk IX in 1943.

The first nine B Mk IVs were known as the PRU/ Bomber Conversion type, or B Mk IV series i. Like the PR Mk I, they were powered by the Merlin 21 engine, used the same glass nose and were entered via a hatch under the cockpit. They also used the same short engine nacelles as the PR Mk I. Production of these nine aircraft took from October 1941 to February 1942.

Deliveries of the main B Mk IV series ii began in April 1942. The main visual difference was that the series ii aircraft used a longer engine nacelle, extending behind the wing. This solved a problem with excessive turbulence around the tail plane of the Mosquito. The aircraft could also carry a 50 gallon slipper type fuel drop tank under each wing. 300 B Mk IV series iis were built before production ended in August 1943.

Experiments with the B Mk V had proved that the Mosquito could carry four modified 500lb bombs, with shortened fins to allow the bomb to fit inside the Mosquito bomb bay. The Mosquito’s bomb load was thus doubled from a projected 1,000lb to a rather more useful 2,000lb. The original bomb load was the same as that used in other light bombers in RAF service, such as the Bristol Blenheim.

In April 1943 that bomb load was doubled again, when the first Mosquito was altered to carry the RAF’s large 4,000lb “Cookies”. This required the use of bulged bomb bay doors, to provide enough space for the big bomb, the removal of some of the internal fuel tank, the addition of ballast in the nose to keep the aircraft level, and the use of under wing drop tanks. This gave the Mosquito a bigger bomb load than many medium bombers! Only 23 B Mk IVs were converted to carry the big bombs. The Mk IV was operating on the edge of its capacity when carrying the big bomb, but for later, more powerful variants of the Mosquito it would become almost the standard bomb load.

A number of Mk IVs were also modified to carry the Highball bouncing bomb. This was a smaller version of the bomb used on the famous “Dam Busters” raid, designed to be used against enemy shipping. No. 618 Squadron was formed to use the special weapon, but by the time they were ready, there were no German targets left, so the unit was moved to the Pacific. By the time they arrived there were no Japanese targets left, and the unit was disbanded without every having used its special bombs.

Initial production of the Mosquito bombers was slow. The first B Mk IV series i aircraft was flow to No. 105 Squadron on 15 November 1941, by Geoffrey de Havilland Jr! Operations began in May 1942. A second squadron was not formed until 8 June 1942, when No. 139 squadron began to share No. 105’s aircraft.

The Mosquito was first used to launch nuisance raids over Germany, with the hope that the constant alarms would wear down German morale. Amongst these raids was an attack on Cologne on 1 June 1942, the day after the first thousand bomber raid. This time Bomber Command launched a four bomber raid.

The B Mk IV also began the Mosquito’s career of pinpoint attacks against special targets. The first such raid came on 26 September 1942, when Mosquitoes of No. 105 Squadron bombed the Gestapo headquarters in Oslo, destroying many records on the Norwegian resistance.

These early raids proved that the basic principle behind the Mosquito - that of a light bomber capable of outrunning enemy fighters – was correct. Even the Fw 190 could at best keep pace with the Mosquito. As faster German fighter aircraft appeared, so would faster Mosquitoes.