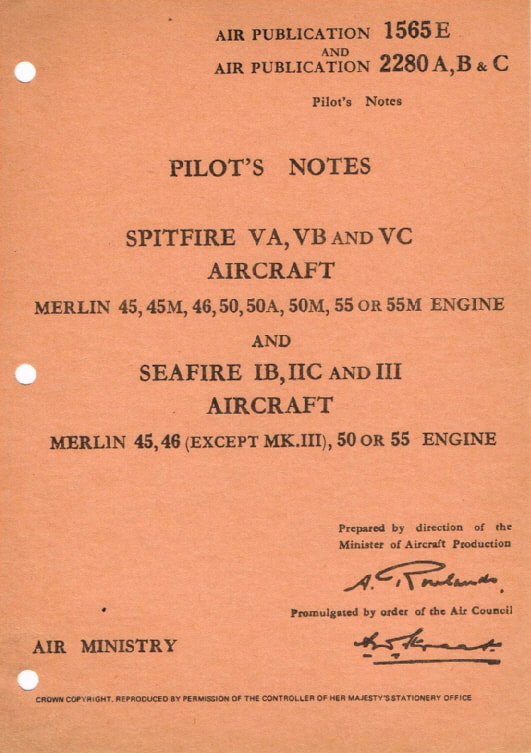 The Mk V was produced in greater numbers than any other single mark of Spitfire. It was the main version of the fighter during 1941, replacing the Mk I and II in service in time to take part in the first British counterattacks over France. During the summer of 1941 it held an advantage over the Bf 109, but in September 1941 the Fw 190 made its operation debut, and the Mk V found itself outclassed. Despite this, it remained the main RAF fighter until the summer of 1942, and the low level LF.Mk V remained in use into 1944.

The Mk V had been designed as an interim mark. The Mk III saw a redesign of the basic fuselage, to carry the more powerful Merlin XX engine. However, that engine was in short supply, and the internal changes in the Mk III would have delayed production. Rolls-Royce had continued work on the Merlin, producing the Merlin 45. This engine produced 1,515 hp at 11,000 feet. It could easily fit in a Mk I or II fuselage, allowing aircraft already under production to be converted to the new standard. Later in the run the similar Merlin 46, 50 and 50A engines were also used in the Mk V. However, while the Merlin XX had a two speed supercharger (one for low altitude and one of high altitude), the Merlin 45 only had the high altitude supercharger.

The first Mk V was produced in January 1941, and tests proved it to be very nearly as good as the Mk III, but without the extra complexity involved in that version. In March 1941 it was decided to produce the Mk V instead of the Mk III. The type had already entered production by this stage, with No. 92 squadron being the first to receive it in February 1941.

Production was initially divided between the Va with the eight machine gun “a” wing (94 built) and the Vb with the “b” wing of two 20mm cannon and four machine guns. Its main opponent over the summer of 1941 would be the Bf 109F. This was probably the best version of the Bf 109 fighter, and very similar to the Spitfire V. This time it was the Spitfire that was better at high altitude and the Bf 109 at low altitude, and the Spitfire Vb that was the more heavily armed (the Bf 109F-2 carried one 15mm cannon and two 7.9mm (.311 inch) machine guns). However, in 1941 the Mk V was used in the various types of missions over France, known as “leaning over the channel”, which saw Spitfire losses mount for little practical return. This time it was the RAF that lost every pilot shot down, with many experienced pilots being taken into captivity on these missions.

Spitfire Mk Vc of No.92 Squadron at Gibraltar

In October 1941 the Mk Vc appeared. This used the universal “c” wing developed for the Mk III, which could carry either eight machine guns, four 20mm cannon or two cannon and four machine guns. The two cannon/ four machine gun combination was most common, as the four cannon version was significantly heavier, reducing performance.

The Mk V saw the first appearance of the F (fighter) and LF (Low level Fighter) designations. LF Mk Vs used modified Merlin 45M, 50M and 55M engines that produced their best power at lower altitudes. With the appearance of the LF Mk V, the standard Mk V became the F. Mk V. The LF Mk V could reach 355 mph at 5,900 feet, making it as quick as the Fw 190 and faster than the Bf 109G. The Mk V also saw the introduction of drop tanks to carry extra fuel, initially a 30 gallon model and later a 80 gallon version. It was also the first Spitfire to be adapted to carry bombs.

The Fw 190 appeared in September 1941, and outclassed the Spitfire V. Several changes were made to the Mk V to improve its chances against the new German fighter while the RAF waited for the improved Mk IX, VI or VII to arrive. One of the most significant was the long awaited arrival of a carburettor designed to work properly under negative-G, which much improved the dog fighting ability of the Mk V. Despite these changes, the Fw 190 remained a superior aircraft On 1 June 1942 during a raid on northern Belgium the Fw 190s shot down eight Spitfires for no lose. The next day another raid suffered just as badly, when seven Spitfires were shot down for no return. Raids over northern Europe would have to wait for the arrival of the Mk IX.

The Mk V was the first Spitfire to be used in large numbers outside Britain. The first such deployment came on 7 March 1942, when fifteen Mk Vbs were delivered to Malta in Operation Spotter. This operation also saw the Spitfire launched from an aircraft carrier. On Malta the Spitfire was used to hold off the Bf 109F, while the Hurricane attacked the lower level bombers. Loses were heavy. Despite a second delivery of Spitfires on 21 March, by the end of 23 March there were only five serviceable fighters on Malta. HMS Eagle, the carrier used to deliver them had now been damaged, and so the next attempt to reinforce Malta was launched by the U.S.S. Wasp. This time 46 Spitfire Vcs were ferried to Malta on 13 April in Operation Calendar. Sadly, many of these aircraft were destroyed in German bombing raids, launched to coincide with their arrival. It would take one more major supply effort, Operation Bowery, to properly boost the defences of Malta. This time sixty Spitfires reached Malta, and the island was ready for them. The same Spitfires that had just flown in were now scrambled to deal with the inevitable incoming raid. Operation Bowery helped to ensure the survival of Malta, thus playing a major role in the successful allied campaigns in North Africa.

The second overseas theatre to receive the Spitfire was North Africa. The delivery route to Egypt saw aircraft shipped to the west coast of Africa, and then flown across the continent in ten stages to Egypt. This was a slow route, and the first Spitfire squadron only became operation in May 1941. This was just in time to take part in the retreat to Egypt in the summer of 1941. After that the Spitfire Vc took part in the air battles that accompanied the battle of El Alamein, flying top cover to protect ground attack aircraft from the Bf 109Fs of the German desert air force. Their presence helped maintain allied air superiority over the battlefield.

The Mk V also saw service in the Far East. Three squadrons were based at Darwin, on the northern coast of Australia from January 1943. The several conditions they faced at Darwin did not suit the Spitfire, which suffered a series of mechanical problems in the hot humid tropical environment. Despite these problems, the Spitfire proved itself able to catch the Mitsubishi Ki-46 “Dinah” reconnaissance aircraft, which had previously been too high and too fast to be caught by the aircraft previously in northern Australia. The Spitfire V’s tropical filters caused a significant deterioration in performance, the aircraft themselves had suffered on the long voyage, and their condition worsened in part because spare parts were rare. The Mk V had a short combat career in India. Three squadrons moved to the Burma front in November 1943, but in February 1944 they were replaced by the Mk VIII, which was exclusively used in the Mediterranean and Far Eastern theatres.