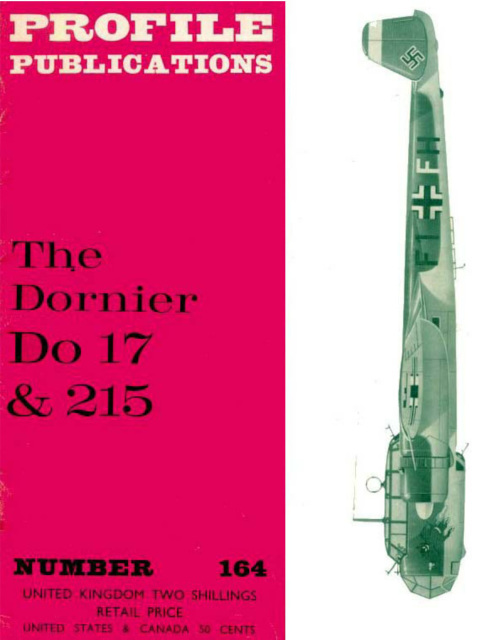 PLUS: 10 extra pages from the extensive FlightWay Archives including a full Cutaway drawing.

The Dornier Do 17, sometimes referred to as the Fliegender Bleistift ("flying pencil"), is a light bomber of Nazi Germany during World War II. It was produced by Claudius Dornier's company, Dornier Flugzeugwerke. The aircraft was designed as a Schnellbomber ("fast bomber"), a light bomber which, in theory, would be so fast that it could outrun defending fighter aircraft.

The Dornier was designed with two engines mounted on a "shoulder wing" structure and possessed a twin tail fin configuration. The type was popular among its crews due to its handling, especially at low altitude, which made the Do 17 harder to hit than other German bombers.

Designed in the early 1930s, it was one of the three main Luftwaffe bomber types used in the first three years of the war. The Do 17 made its combat debut in 1937 during the Spanish Civil War, operating in the Condor Legion in various roles. Along with the Heinkel He 111 it was the main bomber type of the German air arm in 1939–1940. The Dornier was used throughout the early war, and saw action in significant numbers in every major campaign theatre as a front line aircraft until the end of 1941, when its effectiveness and usage was curtailed as its bomb load and range were limited.

Production of the Dornier ended in mid-1940, in favour of the newer and more powerful Junkers Ju 88. The successor of the Do 17 was the much more powerful Dornier Do 217, which started to appear in strength in 1942. Even so, the Do 17 continued service in the Luftwaffe in various roles until the end of the war, as a glider tug, research and trainer aircraft. A considerable number of surviving examples were sent to other Axis nations as well as countries like Finland. Few Dornier Do 17s survived the war and the last was scrapped in Finland in 1952.

On 3 September 2010, the Royal Air Force Museum London announced the discovery of a Henschel-built Dornier Do 17Z buried in the Goodwin Sands off the coast of Kent, England. On 10 June 2013, the salvage team raised the airframe from the seabed.