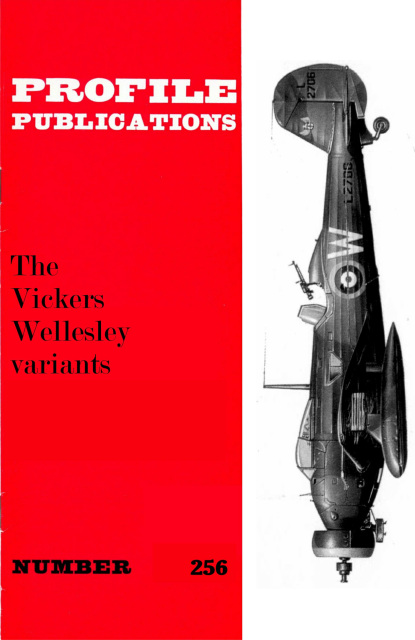 The VICKERS WELLESLEY was a British 1930s light bomber built by Vickers-Armstrongs at Brooklands near Weybridge, Surrey, for the Royal Air Force. While it was obsolete by the start of the Second World War and unsuited to the European air war, the Wellesley was operated in the desert theatres of East Africa, Egypt and the Middle East. It was one of two planes named after Arthur Wellesley, 1st Duke of Wellington, the other being the Vickers Wellington.

The design originated from the Air Ministry Specification G.4/31 which called for a general purpose aircraft, capable of carrying out level bombing, army co-operation, dive bombing, reconnaissance, casualty evacuation and torpedo bombing. The biplane Vickers Type 253 design, which used a radical geodesic airframe construction, derived from that used by Barnes Wallis in the airship R100, was ordered by the Ministry and tested against the specification along with the Fairey G.4/31, Westland PV-7, Handley Page HP.47, Armstrong Whitworth A.W.19, Blackburn B-7, Hawker P.V.4 and the Parnall G.4/31. The Type 253 was declared the winner, with 150 being ordered.

The Vickers Type 246 monoplane, which used the same geodetic design principles for the fuselage and wings, was then built as a private venture, first flown at Brooklands by Vickers' Chief Test Pilot J "Mutt" Summers, on 19 June 1935 and offered to the RAF.[1] This aircraft had superior performance but did not attempt to meet the multi-role requirements of the specification, being designed as a bomber only. An initial order for 96 Type 246s was substituted for the Type 253 order.[1] The RAF ultimately ordered a total of 176 with the service name "Wellesley", to a newly written specification 22/35, with a 14-month production run starting in March 1937.[2]

The Wellesley was a single-engine monoplane with a very high, 8.83, aspect ratio wing and a manually operated, retractable undercarriage. As it was not known how the geodetic structure could cope with being disrupted by a bomb bay, the Wellesley's bomb load was carried in two streamlined panniers under the wings.[3] The Wellesley Mk I had two cockpits but this was changed in the Wellesley Mk II to a single-piece cockpit canopy covering the pilot and navigator positions.

PLUS: Extra pages from the extensive FlightWay Archives.