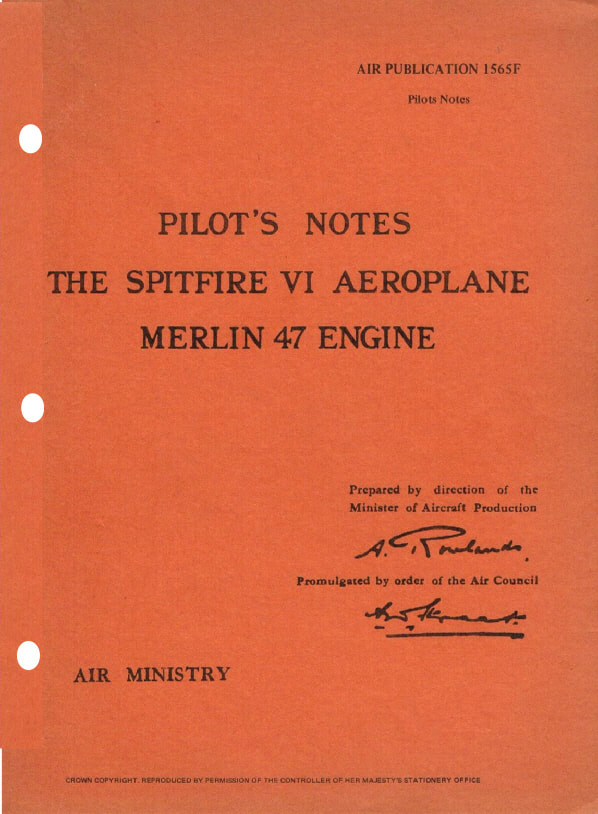 Pilots Notes for the

The Mk VI Spitfire was a high altitude fighter, designed to deal with the threat posed by very high flying Luftwaffe aircraft, especially the Junkers Ju86. The Mk VI used the same airframe as the Mk V, but with a Merlin 47 engine, providing 1,415hp and a four bladed propeller. The most distinctive feature of this version of the Spitfire was its extended wingtips, designed to increase its performance at high altitude. Ninety Seven Mk VIs were built between December 1941 and October 1942. Six were sent to the Middle East, while the rest remained in Britain.

The Mk VI was not a great success. It had a pressurised cockpit that had to be locked in place, making it unpopular with the pilots. Its performance was not as impressive as had been hoped – in the Middle East it was outperformed by modified Mk Vs. Finally, the threat of high altitude German bombers did not materialise. The surviving Mk VIs were removed from front line service, and used as training aircraft. In this role the pressurised cockpit, extended wing tips and guns were all removed. The idea of a high altitude pressurised Spitfire had not been abandoned. Production of the Mk VI overlapped with that of the Mk VII, which began in August 1942.